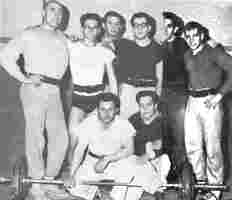 If you were a weightlifter in the state of NY, you knew the Weissbrots! They were the embodiment of the phrase "sports ambassador."

2016 Hall of Fame Inductees, Morris and Gale Weissbrot were true humanitarions, and adored by many in the lifting world. Anyone in the state of NY who weightlifted, knew of Morris and Gale.  In fact, Morris was selected to be one of the coaches at the Lake Placid Olympic Training Facility in the mid 1980s.  The center was not geared toward weightlifting, so athletes had to be bused from the Olympic Village to a school where training could take place.  The Weissbrots always made the best of the situation, however.  Morris is probably best remembered for his numerous stories and anecdotes relating to the early years of weightlifting.  He was one of the best at keeping the audience engaged during competitions, and was reason enough alone, to attend!  He and Gale "adopted" numerous children, and it was not uncommon for athletes to call them mom and/or, as the case dictated, pops!  As Bill Clark said, and athetes agree, "You always knew you had friends when they were near.  Whoever they were talking with at that moment, took priority!  They were both gentle, kind, and compassionate...real ambassadors for the weightlifting world!"