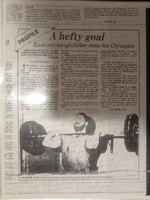 2016 HoF member Joe Gazdik was a fixture at the Empire State Games, and still holds a state record in the Clean and Press!

As the caption above states, Joe Gazdik was a fixture at the Empire State Games.  2016 HoF member Joe Gazdik was a national caliber Olympic Weightlifter who competed at the 1984 US Olympic Weightlifting Team trials.  Joe held state records for years, and still claims the standard in the Clean and Press.  Joe Gazdik was known for his technical execution and smooth style of lifting.  Bill Clark, coached by Gazdik during this time frame, stated, "Joe Gazdik taught me many things about weightlifting, but he also taught me a few things that I cherish even more.  I was selected to the (under 24 years of age) Pan Am Team at the age of 19, and I knew that I had the chance to win gold medals.  I also knew that the majority, if not all, of my competitors would be using steroids.  Since he had been in the game for sometime, I asked Joe Gazdik his opinion, and I will never forget his words to me.  He told me that someday I would have a family, and that they would be much more important than the Pan Ams.  He urged me not to take them, and I didn't.  I didn't then, and I never have, and I owe, in part, Joe Gazdik for that choice. That's a perfect example of why all of us need to be careful of who we keep company with.  A lesser coach, advisor, and friend would have handled things differently, but Joe put me ahead of the situational gains, and gave me the best advice that could have been given.  Poor leaders use people to make themselves look better, while great leaders put other people first.  Joe Gazdik was a leader!"